Dana Lynne Andersen has taught and exhibited on three continents. Her paintings have been featured on the covers of books,  magazines and calendars and her artwork, as well as her visionary thinking, have been featured in newspapers, radio and television. 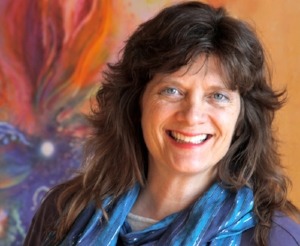 In 2002 she founded  “Awakening Arts”, an international network of artists committed to the creation of art that is uplifting and transformative. In 2009 she began teaching in Italy and India, establishing The Academy of Art, Creativity & Consciousness and developing a certification program in Transformative Arts approach.  The Academy has two centers; near Assisi, Italy and Portland, Oregon.

Dana is a disciple of Parmhansa Yogananda and a kriyaban through Ananda. She has illustrated several of Swami Kriyananda’s books. In addition to her international presence in the art world, she  shares her joyful, creative inspirations in workshops throughout the Ananda world as well.