We are now meeting IN-PERSON every 1st and 3rd Sundays. On the 2nd, 4th, and 5th Sundays, we are still online.

Puru Selbie is the author of The Physics of God. An avid follower of the unfolding new paradigms of science, he is known for creating bridges of understanding between the modern evidenced-based discoveries of science and the ancient experience-based discoveries of the mystics.
A dedicated Kriya meditator for nearly 50 years, he has taught yoga and meditation throughout the US and Europe helping people to understand and find their own spiritual 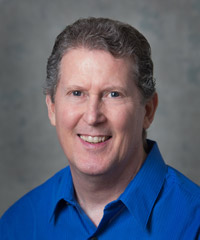 potential—and helping them understand how the expression of their spiritual potential ushers into the world an unstoppable wave of peaceful consciousness.
He is a founding member of Ananda, a world-wide spiritual movement. Puru has been with Ananda since 1975 and has served in a wide variety of roles including IT Director, Ananda Village Community Manager, Lightbearer, and spearhead for Ananda’s work in Europe and Seattle.
He is the founder and CEO of Tristream, a leading-edge web and interactive design agency which helped pioneer user interface design for the web and for richly interactive web-based applications. Tristream has served Fortune 1000 companies such as Cisco, KPMG, Manpower, Ariba, and Logitech. While active in the industry, Joseph taught the principles of interactive design at conferences in the US, England, Holland, and Spain.

Puru is the author of several other books exploring how spirituality connects with culture and science, including: The Yugas, a factual look at India’s tradition of cyclical history, and a sci/fi fantasy series, The Protectors Diaries, inspired by the abilities of mystics. He is currently working on a new book, The Psychology of God, an exploration of the intersections of psychology and neuroscience with consciousness.